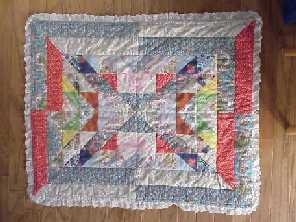 Hi, my name is Kit Morse. I live in San Mateo with my husband, Jamie, and daughter, Miranda. My quilting story began in high school after taking a sewing class. I learned the basics of sewing, and quickly decided that sewing clothes was just not for me! All those curved and eased seams did me in. I thought my sewing days were done, but then one day I looked at my baby blanket, which I had steadfastly kept with me all those years and was unwilling to let my mother throw away even though the garbage can was all it was good for. It was torn so badly that most of what was left was the batting! Anyway, I decided that I would quilt a new cover for it. So I took all the remnants of fabric from my high school sewing projects and designed my own quilt top. For a 16 year old it turned out pretty well. I still have it with me (I guess I am like Linus at heart!) and thought you might enjoy seeing a picture of it.

Well, I didn’t do much more quilting until I got into college and one of my roommates decided that we should have matching quilts on our beds. So we went off to the local fabric store (they didn’t have quilt shops back then) and bought some fabric that she loved and I hated! Then we started designing our own patterns for our quilts. I spent my entire Christmas vacation putting that quilt together and when we got back I proudly displayed it on my bed. My roommate, of course, never finished hers, so I had this lovely quilt out of fabric I couldn’t stand on my bed for the rest of the year!

After graduating from college there wasn’t much time for quilting as I started on my professional journey into the world of computer consulting. I worked for a small consulting firm for a couple of years, then at the ripe old age of 26 decided that I could do this on my own and started my own company. I have been consulting for the last 15 years and have enjoyed it very much.

In the 90's I was hit with the quilting bug once again after seeing the gorgeous quilts my sister-in-law was creating. She, Lynn, lives in Washington and has been turning out one fabulous quilt after another for many years. She has so many quilts in her home you can’t even find a place to sit down without having one under, behind or over you! Sound familiar?

So even though I was really busy with my business I found time to get all the quilting paraphernalia and got started. I was hooked immediately, already thinking about ideas for my future quilts when I hadn’t finished the first one. I did finish the first one and many more and continued my obsession until I was just about to give birth to my daughter, at which time I decided I would no longer have time to quilt between being a new mom and my consulting business. Well, when Miranda was about 6 weeks old, I started having quilting withdrawals! I couldn’t handle it anymore and had to get out the sewing machine! So now I have my quilting corner in the family room with everything ready to go on whatever project I am working on and even if I only get 5 or 10 minutes a day at it I can satisfy my obsession! Now a day without quilting is like a day without sunshine!

I then started on a new quilting journey with Julie, my friend, business partner and fellow obsessed quilter, in our new online store, Always Quilting. We hope you enjoy visiting our site as we will endeavor to carry the newest, most fabulous fabrics we can find in the marketplace!

Kit Morse
Julie's Quilting Story
by Julie McAuliffe
Hi, my name is Julie McAuliffe. I live in San Mateo with my husband Kevin and four children – Scott, Shannon, Kathryn, and Ryan. My sewing career began at about age 8 when my grandmother taught me how to make “yo-yo” circles and put them together in a small quilt. This started my love of handwork and embroidery. My other grandmother taught me how to sew on the machine, and I was off and sewing! I started with making clothes, and made most of my clothes throughout high school, including those fashionable hot pants of the 70s.

In college, I worked my way through school by working at the local fabric store, and again, sewed most of my own clothes, as well as many model garments for the store, including coats, stuffed animals, upholstery items, and a wedding dress! I entered the Simplicity National Sewing Contest and won with a bright yellow raincoat made out of upholstery fabric with an embellished piping rainbow. I also earned a summer school trip to Spain by making over 250 miniature window treatments as samples for a woman who invented a mini-window pleating tool.

After college, I went on to work as a computer consultant during the day and in the fabric store at night. My future husband was in law school, and since I was new to the Chicago area, I wanted to meet some friends in the area, and knew that the best friends I could meet would be those who were working in the local fabric store! I did all sorts of jobs at night, from managing inventory (ordering and restocking) to managing the model garment program. Of course, I continued to make samples for just about everything except quilts! I did make one of the original VIP Jack-in-the-Box quilts, but didn’t get the quilting bug at that time…I was really focusing on decorator items like window treatments, upholstery, etc.

I had always dreamed of making clothes for my children – beautiful dresses with lots of ruffles and smocking, but after I had my children, I discovered there was no time for sewing….and they would grow out of things before I got them done! I was still working full-time as a computer consultant and raising the children, so I put the sewing machine away and dreamed of a time when the kids were older and I’d have time to sew again. When we moved to California, I gave away over 17 boxes of fabric, and in the move, I lost some of the parts to my beloved Kenmore machine and that was that.

However, when the kids started playing sports, and our team needed a soccer banner, I was the only mom on the team who knew how to sew…so I bought a basic Pfaff machine and made the banner. I had to admit it was fun to sew again, but I still didn’t have much time, so the machine sat for a while….

Then so sadly, my father was diagnosed with terminal cancer, and I went to a quilt show during the waiting time between one of the hospital visits. I loved the quilts and thought it would be a nice tribute to make a quilt for my father. So I bought lots of fabric - I was still in dress-making mode where if you like something, you need at least 2 ½ yards for a shirt/pants, etc., and I didn’t understand what a fat quarter was – and started to make quilts.

At the same time, the computer consulting company I was with got hit by the technology bust, and I was out of a job. Since I wanted to be able to travel to see my dad, I didn’t look for another corporate job at that time. Instead, I went to work part-time for a local quilt store. It was a wonderful opportunity, and I learned many things from a fabulous teacher. I made new quilting friends and will always be grateful for their support during the difficult time of losing my father. I joined the quilt guild, and began thinking about not going back to the corporate world, but finding a career in the quilting industry.

Even though Kit and Sharon lived in my neighborhood (Kit is literally one block down on the same street as me), I had to go to the quilt guild to meet them! I was very excited about their online shop and began helping out on days when I wasn’t working. One thing led to another, and as the business grew, I bought Sharon out and became a partner.

We opened our brick and mortar shop in February 2003, and have been working hard and having fun ever since! In February, we taught classes at the San Mateo Quilt and Embroidery show, and I had a quilt display of over 30 quilts all made from the same pattern – Yellow Brick Road by Terri Atkinson. I’ve had one quilt, Mardi Gras Magic, juried into the Pacific International Quilt Festival, and two quilts that have won the grand prize theme award at the San Mateo County Fair. I’ve had several other quilts win ribbons at the fair, and it is always fun to see the quilts hanging at the fair and in other quilt shows. I’ve been so inspired by quilters from our guild and from the shows I’ve seen, and it is an honor to give back to the quilting community in some small way by helping create Always Quilting!